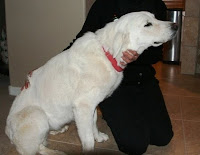 Snowi was found as a stray, wandering the streets, hungry and sick. She was taken in and is being nursed back to health and she is now starting to eat and regain some of her strength.

She is looking for either a foster or adoptive home as the people who took her in are not able to keep her long term.

She is very sweet with people but is not overly fond of other dogs. She is very typical of the Anatolian nature and is protective of her home/property and, even though she is weak and malnourished, she still gives the coyotes fair warning to not come around!

She is about two yrs old, is housebroken and walks nicely on a leash.

For more information on adoption or fostering, please email me at
nasrn@nasrn.com

Posted by AnatolianRescueLady at 3:56 PM No comments: 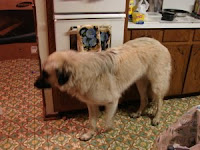 My dog, Faith, went missing Christmas day. She is a 120 lbs Anatolian Shepherd with long thick cream/agouti coloring and a black mask and ears. She is spayed and tattooed. She's approx 5 to 7 years old with slight greying on her muzzle. She is very sweet and gentle. She will jump into a car for a ride. Please if you see her or have her in your yard try to coax her indoors if possible and email or call me. I learned that somone in a white truck picked her up two houses away from mine on Saturday. She hates being on a leash and will struggle to get away. My search has now expanded to include all of Houston . Please, any information you have could be helpful. Thank you for your time.

Faith went missing around noon on Christmas day. She was last seen on CR 192 in Liverpool TX. Faith was abandoned on our street several weeks ago and is not familiar with the area. We've since fallen in love with her and consider her a part of our family. We want her back. She's a sweet wonderful dog but she's very shy and absolutely hates collars and leashes. I'm so worried that she will jump into someone's car and then run away because she won't allow anyone to put a leash on her. Please if you have seen her, call me. We just want her safe and back at home, where she belongs.

If you have any information regarding Faith, please email me at
firedragonsgold@hotmail.com
Katrina
Posted by AnatolianRescueLady at 7:08 AM No comments: 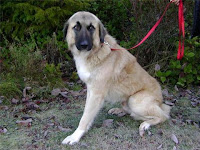 TACOMA WASHINGTON:
UPDATE: JANUARY 2, 2010
THIS BOY HAS A PENDING ADOPTION

Young adult male Anatolian in urgent need of foster or adoption. He was picked up as a stray; friendly with people, good with other dogs. Walks nicely on lead, is quiet and has good house manners.

For more information on adoption or fostering, please email me at
nasrn@nasrn.com

Posted by AnatolianRescueLady at 5:54 PM No comments: Mack is an 8 month old male Anatolian x Great Pyrenees cross. He is in a kill shelter and needs either a foster or adoptive home ASAP.
He is friendly with people and good with other dogs.
Even a short term foster would help to save him!


For more information on adoption, please email me at
nasrn@nasrn.com 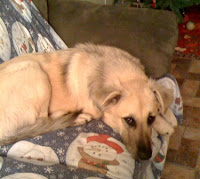 URGENT
LITTLE ROCK ARKANSAS: Bella is an 8 month old female Anatolian mix, was found as a stray and is looking for a foster or adoptive home. Very good natured, smart, friendly!

Posted by AnatolianRescueLady at 8:17 AM No comments: 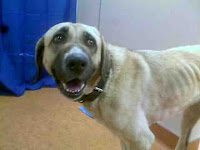 SACRAMENTO CALIFORNIA:
DEC 16 UPDATE: THIS GIRL HAS BEEN ADOPTED

Amazon, or Mazie as her volunteer fans call her, is a gentle giant. She's about 2 years old and as you can see by her photos, extremely underweight. But a good quality food and TLC will have her back in good form again shortly.

Mazie knows the command "sit" and walks so nicely on leash you really don't need one. She is showing signs of being house trained, but all shelter dogs need a week or two of your patience while you learn each other's routines.

Mazie seems to like other dogs and we can test her with cats. She's an extremely mellow dog right now but will probably be more lively once she's in a home and has her weight and health back. Mazie is also a bit shy at first, especially of loud or sudden movements, so a house without small children is ideal for her.


For more information about this animal, call:
Sacramento County Animal Care and Regulation at (916) 368-7387
Ask for information about animal ID number A512607
Click here for SHELTER WEBSITE information on adopting or visiting Mazie
Posted by AnatolianRescueLady at 11:31 AM No comments:

Sully is a handsome and sweet natured 8 month old 80 pound Anatolian Shepherd. He is neutered and fully vetted and is in good health.

Sully was rescued off death row in an Arkansas shelter. He loves to play with other dogs, is good with cats and good with kids too.
He is just a big goofy, silly pup right now, looking for a family to call his own.
He would love to have a canine buddy to run and play with.

For more information on adoption, please email Shelley Smith with Dogs Only, Inc. at
contact@dogsonly.org 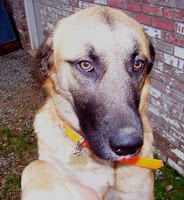 Posted by AnatolianRescueLady at 11:01 AM No comments: 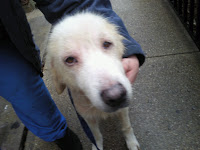 THIS GIRL HAS BEEN TAKEN INTO RESCUE BY THE WONDERFUL LADIES W/SPIN (SAVING PYRS IN NEED). THANK YOU, LADIES, FOR SAVING THIS SWEET OLD GIRL.


This poor girl barely has any hair left and she is in terrible condition. A girl found her wandering the streets in the DFW area.
She took her home but cannot keep her in her tiny apt and we are desperately seeking a foster---even short term foster would keep her from going to a shelter.
A shelter would likely put her down bc of her medical needs.

We have not had her to a vet yet but NASRN will cover all of her medical bills if we can just find a foster for her.

She is sweet and friendly and gets along with the little Pomeranian in the apt.

Please let us know if you can help, even for a week or so! If we cant find a place for her the girl will have to take her to a shelter.

For more information on fostering or adoption, please email us at
janna@nasrn.com 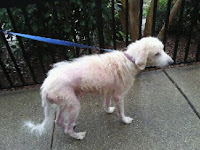 Posted by AnatolianRescueLady at 6:11 AM No comments: 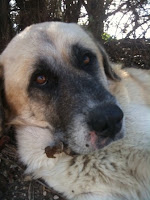 Charlie, along with his Great Pyrenees girlfriend, were unceremoniously dumped on a country highway north of the DFW area.
Pyrenees rescue is taking the girlfriend and we are trying to find a foster or adoptive home for this poor guy.

Charlie is a very gentle, docile boy. He's good with other dogs and seems to be good with cats too. He's good around kids and adults as well.
Right now, the only safe refuge we could find was an outdoor kennel with a dog house.
All the other boarding kennels were full.
Not the best option but at least its safe and he has food.

When Charlie went to the vet today to get his shots before he went to the kennel, we found out that he is heartworm positive.
We REALLY want to get this sweet boy into a foster home so we can start him on the slow kill treatment for heartworms.

We will always do our best to help transport within 1,000 miles.
PLEASE let us know if you might be able to help this sweet boy.

For more information on fostering or adoption, please email us at
CentralTammy@nasrn.com 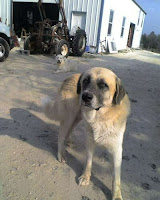 Posted by AnatolianRescueLady at 3:18 PM No comments:

Last September I posted about a senior Anatolian mix named Husky who had been abandoned by his "owners" when they fled their foreclosed home.

Two neighbors had been bringing Husky food and water but Husky's days were numbered at the abandoned house.

Luckily for Husky, Nancy F. read about his situation and volunteered to take him in temporarily. Another local rescue group said they would have room for Husky in two weeks so Nancy said she would hold on to him until they could take him.

Well, two weeks turned into 3 and then turned into a month or more. The local group did not want to take Husky after they found out about all the medical care he needed.
Husky needed to be on thyroid medication and he had terrible ear infections which required frequent (painful) cleanings and medicating.
Nancy continued to take care of Husky, giving him lots of TLC and helping him to regain his strength and health. The two neighbors have continued to pay for all of Husky's veterinary care and travel to Nancy's to visit him even though she lives a couple hours away. 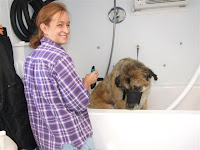 Husky has been with Nancy for about 3 months now and he is doing so well. The vet has told Nancy that Husky is 95% better now. That is a huge improvement considering he was about one week away from death when she got him. 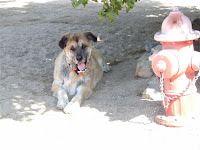 If you look at the pictures of Husky, how he looked when Nancy first got him....and look at him now. He looks like a completely different dog.
He is feeling good and enjoying life, probably for the first time, ever.
He loves going places ..... El Pollo Loco is one of his favorite places to go, he loves their chicken =) He also enjoys the company of Nancy's grandchildren and even feels good enough to play with some of the other dogs. 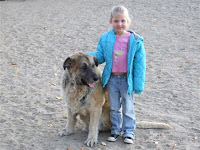 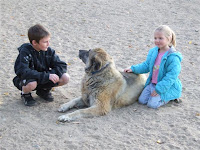 Thank you so much, Nancy, for opening your home and your heart to this old, dirty, sick dog that didn't have much hope left.
You've given him a new lease on life and given him a loving home with companionship and comfort for his twilight years. 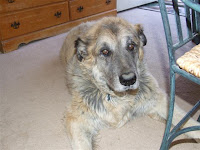 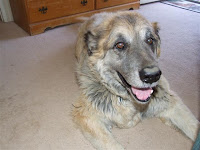 What a GREAT SMILE!!!

Posted by AnatolianRescueLady at 6:43 PM No comments: