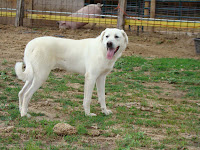 I can't believe this, but Shelley (Smith) in Little Rock actually found someone to pick up ALL four of the ASD x Pyrs in Arkansas! The owner gave us a deadline of getting them by this weekend---no easy feat to find a place for 4 big dogs within a couple of days.

Whew. Shelley, you're a life saver.

HEY, there are 3 one year old ASD x Pyrs, all female, that are going to be looking for foster homes ASAP after they are picked up.

We hope to have pictures coming soon!!

Surprisingly, we've had a few applications this week that might actually lead to adoptions! Keep your fingers crossed!
We have so many dogs right now, if we could get some adopted, that would free up some foster homes.

Well, thats about all for now. Roxi and Caleb are still in boarding kennels looking for fosters, too!

PS---the pretty Akbash girl smiling in the picture is "Anna", from Colorado, who was recently adopted and is now a California girl :-)

Posted by AnatolianRescueLady at 5:46 PM No comments:

We received word of 4 ASD x Pyrs in n/e Arkansas that are in need of homes right away. Apparently the woman who owns them is having to move in w/her son due to the economy so she is giving up all 4 of her dogs.

Caleb went to the boarding kennel yesterday, he is still in need of a foster.

Roxi is supposed to be getting out of the shelter today and going to a boarding kennel also. I feel so bad for the older dogs when they end up in a shelter. Karen D found out that the shelter adopted her to someone in an apartment! No wonder she was barking.

Don't forget to order your 2009 calendar if you haven't done so already.

We will be having a new fundraiser in November with wonderful, all natural health/beauty products. Stay tuned, we will probably start this in early November, in time for buying special holiday gifts.

I know it's still 3 months away, but NASRN will once again be attending the Arizona Animal Festival in Tucson AZ this coming February. (I need to look up the date) This will be our 3rd time and I have to tell you, it is really a lot of fun. Anyone close enough to attend should try to make it out. It's a really big event with many exhibitors and vendors. The weather is usually great here in Feb, too!

We received an interesting note from a man in Chicago that is studying ancient breeds of dogs. He's looking for DNA from pure bred Anatolians to do a study on them. It sounds like a very interesting project. Beth G. has contacted him for more info and to see if we can be of any assistance.

Well, thats all for now, I guess :-)
Featured picture today is an old picture of my daughter and our Anatolian, Ranger, who crossed the bridge last year. We miss you BubbaDog.

Posted by AnatolianRescueLady at 1:10 PM No comments: 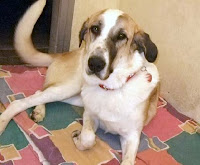 We are listing a new boy today, his name is Caleb. He is being sprung from a shelter in Arlington, TX. No foster for him so he's going to have to go to a boarding kennel. Not an ideal spot but it's better than being put down.
This is a picture of Caleb, isn't he handsome? He's about two yrs old, maybe younger, still tall and gangly in that teen-ager phase. If anyone is interested in fostering or adopting, LMK! He's great with kids, dogs and even ferrets!

Remember yesterday I said that Roxi in NM was adopted? Well the shelter called Karen D today and said the people brought Roxi back. She apparently barks. Really? Wow, thats hard to believe! Imagine that, an Anatolian that barks. So surprising!

So Roxi is back at the shelter and is looking for a foster or adoptive home again. She's good with other dogs in the home, is housebroken and very sweet.

As many of you know, our Fundraising Chairperson, Jim Hart, lost his beloved Gus last night. We're all thinking of you and your family, Jim. So very sorry for your loss, I know Gus was loved very much.

We've had quite a few adoptions over the last couple of months so I'm going to try to list them. Please forgive me if I forget someone and be sure to LMK if I did so I can add them to the list. Also, I know that several of the dogs have been renamed but I'm using the names they had when they were on the website for adoption to keep the confusion down.