More than 6 1/2 yrs ago Starr and her litter mates, who are Central Asian Shepherds, found themselves looking for loving homes. Starr was lucky enough to be adopted by Robin Miller.

Robin runs a B & B in northern CA and also raises horses. Starr is the faithful guardian to both Robin and the farm, including the mini horses. Robin writes:
"Starr is quite a big girl as livestock guardian dogs are and normally quite serious about her job protecting the horses. Despite that, she desperately wants to be a "little" dog whenever three of our bed & breakfast guest dogs arrive. The three belong to two other couples and the dogs are dachshunds. There whole bodies are about the size of Starr's head. So, she will crouch as low to the ground as possible to reduce any intimidation (in her mind!) and just desperately wants them to run and play with her. The dachshunds will race up and down her fence line while Starr "plays" by racing back and forth along with them. Her face peels back in a smile and she just loves it!"
I don't know about you guys, but I, for one, would love to see that for myself. :-) Great job, Starr, what a beautiful girl she is.

UPDATES:
As you might have already seen, the 10 mo male in the Pasadena shelter is going to Caucasian Ovcharka rescue, so he is no longer in danger! This is great news, Angie Wheat does an amazing job rescuing these dogs.

Also, "Arlo", the dog listed as urgent in a WV shelter a couple of weeks ago is being adopted by his foster family!

We have a few pending adoptions, too:

Unfortunately we do still have a few dogs in urgent need of fosters or adoption.

You can find their listings and the listings of our other Urgent dogs here: nasrn.com/URGENTdogs.htm

Posted by AnatolianRescueLady at 2:56 PM No comments: 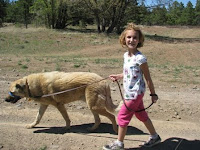 With much sadness, our VP, Karen Dirksen said good bye to her 9 1/2 year old Anatolian, Sammy this week. Sammy was diagnosed with cancer just a few weeks ago and Karen learned that it was in his lungs and other organs as well as in one of his legs. It came as a great shock as Sammy had not shown any signs of illness before then.

As you can see from this picture, Sammy was a gentle giant. He was a true goodwill ambassador for the breed, as he never met anyone he didn't like. He happily accepted all of the foster dogs that Karen has taken in and helped raise more than one foster pup.

Sammy loved to rub his big ol' head on anyone that was close by, it didn't matter if he knew you or not. It was just his way of saying hello and hoping you'd pet him.

Sammy started his life on a little island in the Aleutian Islands of Alaska. Over time, Karen would come to adopt one of Sammy's half brothers (Joey) as well as Sammy's mother, Sadie, who passed away 18 months ago.

Karen and her family are mourning their loss, Sammy has been a big part of their lives for a long time. Whenever we had a public event, Sammy was always the dog Karen would bring since he was always so good with strangers and other animals.

He is missed deeply by all that knew him, including myself and my family. Our most sincere condolences go to Karen and her family.

Posted by AnatolianRescueLady at 11:21 AM No comments: 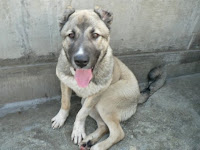 UPDATE:
THIS BOY IS NOW IN THE CARE OF CAUCASIAN OVCHARKA RESCUE ! A special thanks to Angie Wheat for saving this guy! 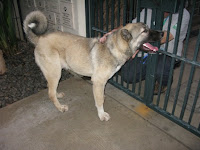 PASADENA, CA:
This handsome guy is in a shelter and is in urgent need of a foster or adoptive home ASAP. He is appx 8-10 months old, neutered, vetted and in good health. He's friendly, silly and puppyish. He will need to learn basic commands and such but he has a very nice temperament and seems to pick up on things quickly.
Please let me know if you might be interested in this young fellow anatolianrescue@yahoo.com
Posted by AnatolianRescueLady at 11:13 AM No comments: 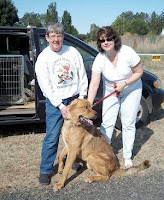 **Note: this article is a few months old but is worthy of posting here, even if it's a little late. :-)

HAVE DOG, WILL TRAVEL

Labor Day weekend is not only a worker's break from everyday activities, but also an opportunity for dog lovers to save another life.
This pass weekend Clyde, a skinny 93-pound Anatolian Shepherd mix, escaped certain death in a shelter in Reliance WY by hitching rides to the safety of a foster home in Salem OR.
The AZ based National Anatolian Shepherd Rescue Network (NASRN) set up Clyde's transportation.
His journey of 970 miles began Saturday with the first of 10 legs filled by volunteer drivers.
On Sunday Leslie Devine of Pendleton picked Clyde up in Baker City to bring him back and hand him over to Cynthia Hildebrand.
She drove him on to The Dalles where he was handed over to the next volunteer on his trip to Salem.
Clyde was unclaimed in the shelter in WY and then taken to a local vet clinic where he became a blood donor. The clinic staff couldn't bear to send him back to die at the shelter so they contacted NASRN in hopes of getting him into their rescue program.
A foster home was found in Salem OR so the trick was getting him there. Ten volunteers stepped up to drive Clyde across 4 states to wait in Salem for his new home.
Sunday was not the first time Devine and Hildebrand have teamed up to help a dog. In September 2007 they spearheaded a search for an escaped Chihuahua who was finally caught at EOCI.
Posted by AnatolianRescueLady at 1:54 PM No comments:

OOPS! I forgot to post the link to the website for the Arizona Animal Fair in Tucson, February 21st.
You can see the list of vendors and exhibitors, sponsors, events, etc:
http://www.azanimalfair.com/
Posted by AnatolianRescueLady at 1:12 PM No comments: 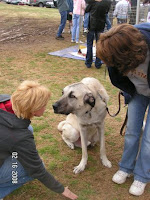 TUCSON, ARIZONA
FEBRUARY. 21st
10 am-5 pm
JOIN US AT THE
ARIZONA ANIMAL FAIR

NASRN is once again attending the annual Arizona Animal Fair this February 21st. This is the third year that we have had a booth there and it is just so much fun. There are more vendors and exhibitors each year....this year is going to be bigger than last.

If you're looking to adopt an Anatolian come by to meet some of the dogs and chat with us.

If you've adopted a dog from us, we would LOVE to have you stop by with your dog and say hello!!

If you're an Anatolian lover, no matter where you got your dog, please be sure to come by and say hi.

The weather should be great and this is a really fun event for the entire family.

Posted by AnatolianRescueLady at 10:24 AM 3 comments: