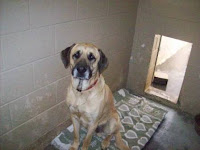 I doubt Tom Petty had dogs on his mind when he wrote that song but it's a good description of the experience one of our foster dogs (and a little buddy) had yesterday.

Taurus found himself sitting in a scary shelter and facing euthanasia after his owners turned him in for chasing livestock. (see his shelter picture above)
Thanks for a group of animal loving pilots, Taurus was able to make the trip from the shelter in Tennessee to his foster home in Wooster OH.

"Pilots And Paws" is a 501(c)(3) organization of volunteer pilots who donate their time and flying expenses to help transport rescue animals from shelters to the safety of foster homes or adoptive homes.

What would have been more than a 7 hour ground transport took less than 2 hours.
Another shelter dog was on his way to foster care as well so Taurus was able to hop on board.
According to John, the pilot, both dogs napped on the flight and were rather curious about where they were and what was going on, but both were very good passengers.

A huge thank you to Pilots and Paws for helping not only Taurus but many other shelter dogs! What a great bunch of people.

Taurus is still looking for an adoptive home, btw :-) He's very sweet and friendly with people and good with other dogs.
He is 3 years old, neutered, fully vetted and in good health.

About 4 yrs ago, Shelley Smith w/Dogs Only Inc. in Little Rock AR received a call from the local dog pound that there might be an Anatolian at their facility.
The shelter vet believed this dog had bone cancer due to a large lump on one of his front legs.
Not one to be deterred by something like that, Shelley had someone take a look at the dog and then decided to take him into their rescue program, cancer or not.

Once Shelley got "King" to the vet and they opened up his leg, much to everyone's surprise, a 9mm slug rolled on to the operating table!
King's shoulder had been shattered by the bullet and he needed some TLC and down time to recuperate and put some weight on.
King had apparently been laying in basically the same spot for at least a week after he had been shot. He was covered with hundreds of ticks and was emaciated. It's amazing that he survived on his own after being wounded like that.

Even during his recovery, King was still being true to his heritage and could not sit idly by when he could hear noises on the other side of the privacy fence.
King would jump,from a stand still, high enough to see over the 6 ft fence. He never tried to go over the fence but he was determined to get a look at whatever was going on.
King was adopted by a family who had recently lost their female Anatolian. King's new family was in the military and had grown fond of the breed while stationed in Turkey. King is quite content these days to lay around with "his" two donkeys. King's dad reports that King instantly appointed himself as the donkey's guardians when he brought them home.

I'm so glad that Shelley didn't turn her back on him when the shelter vet said he probably had cancer. Just goes to show that it pays to get a second opinion!!

Way to go, King, you're a true survivor and a testament to the strength and determination of the Anatolian Shepherd Dog.
Posted by AnatolianRescueLady at 1:29 PM 1 comment: 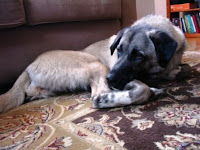 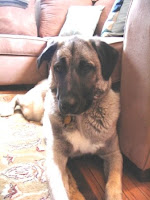 Cheyenne is a stunning Anatolian Shepard . Her coat is predominately light tan in color with black flecks throughout. She has dark gray ears and muzzle, a large fuzzy tail that curls over her back and white feet that are speckled with tan. Her eyes are a dark caramel color and droop slightly - very cute! We believe Cheyenne is approximately 2 1/2 years old.
She's a loving girl that would be happy to spend her entire day napping at someone's feet. with the occasional interruption of a few strokes on the head. However, she does enjoy getting outside and taking walks or relaxing in the sun. Though, her favorite past time is playing in the snow.

This loving and loyal dog was found as a stray. Shortly after being found someone noticed that she was limping and her left hind leg looked somewhat atrophied. It was then that Cheyenne was diagnosed with terminal bone cancer. Her left hind leg had to be amputated and her prognosis is poor. Despite the odds, Cheyenne continues to do well without any signs or side effects of the cancer. Of course the biggest concern with this type of cancer is that it will spread to her chest, so she requires radio graphs every 3 months to monitor the condition of her lungs.

Cheyenne has an understanding on a few basic commands, but she is very head strong and intelligent, so she needs an experienced and assertive owner. Additionally, Cheyenne has a small degree of separation anxiety and does not do well when crated. (She can work her way out of just about anything - honestly, we've tried.)

Overall, Cheyenne is a wonderful companion despite her little quirks. She would do best as an only pet, but does get along well with cats. Although, at this time we would not recommend that she be left unsupervised around them. She also gets along with some dogs; however, it is imperative that she have a clear understanding of the pack order (and the fact that she's not top dog).

Update: Cheyenne had her second round of radio graphs and she still shows no signs of metastatic disease. This is amazing considering she was given 6 months to live over seven months ago!

Cheyenne is in Hunterdon NJ and is in need of a FOSTER or ADOPTIVE home. If you are interested in learning more about Cheyenne, please contact Danielle at
rice.danielle@gmail.com

Posted by AnatolianRescueLady at 1:02 PM 2 comments: 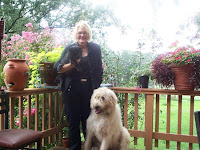 Back in 2006 we rescued 4 Anatolian/Komondor/Great Pyrenees puppies from a shelter in Tennessee. To say these pups are unique is an understatement!
They are all grown up now....one lives in Arizona, one in Colorado, one in Texas and one in Oklahoma.
This is an update on "The Colonel" who is now living in OK (pictured here with his loving "Mom").
Colonel has his own web page on The Daily Puppy, click on the link below to see more pics of Colonel in his adoptive home.

You can see more pictures of The Colonel here


Posted by AnatolianRescueLady at 4:03 PM No comments: