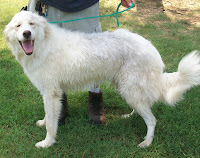 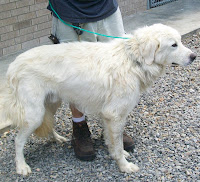 Kol and NaeNae are pure bred Akbash Dogs and are in a kill shelter in Beebe Arkansas.
They are both running out of time and are in danger of being put to sleep.

Kol is 2 yrs old, NaeNae is 1 yo. They are spayed and neutered and said to be good with other dogs.

If you might be able to help them, please contact the Beebe Humane Society ASAP as their time is running VERY short.

If you are able to help or need more info please contact:
twocorgistoocute@aim.com

Posted by AnatolianRescueLady at 8:05 AM No comments:

Tacoma is an 18 mo male Anatolian x Pyrenees. He's a good natured, tail waggin boy. He is in need of a foster or adoption ASAP.


He was left in the over night drop box at the shelter!!

Posted by AnatolianRescueLady at 5:50 PM No comments: 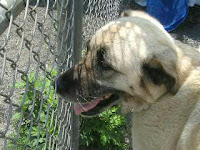 Ana and Nick are pure bred Anatolian Shepherds that were seized from their owners in an abuse case. They are both in a shelter and are in desperate need of foster or adoptive homes ASAP.

Ana's collar was embedded into her neck when she was first taken from her owners. The collar was surgically removed and the wound has healed well. She still has a bald spot there but the hair should grow back soon.

Both dogs are very sweet with people and are very thankful for any bit of kindness they are shown.

Nick is appx 6-7 yrs old and is very calm and mellow.

Ana is appx 4-5 yrs old, she is very sweet and mellow as well.

They get along with each other but they have not been tested with other dogs at the shelter.

We are in need of either foster or adoptive homes for both of them. They do not need to stay together, so they can go to different fosters or adoptions, however, if someone was able to take them as a pair that would be fine too.

We will do our best to assist with transport within 1000 miles.

This is a picture of Ana.

Please e mail me if you are able to help these two. They certainly deserve a second chance to have a good life, they have suffered way too long.


Posted by AnatolianRescueLady at 6:59 AM No comments: 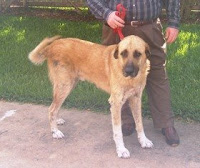 HOUSTON, TEXAS: UPDATE: 6/25/09 THIS BOY IS OUT OF THE SHELTER AND SAFELY IN A FOSTER HOME!


This is a 3 yo male Anatolian Shepherd dog that is in a Houston area shelter. He is in desperate need of a foster or adoption ASAP so he won't be put to sleep.
The shelter reports that he is very sweet and calm, he does not react to the other dogs barking and doesn't react to cats either.

Posted by AnatolianRescueLady at 6:27 AM No comments: 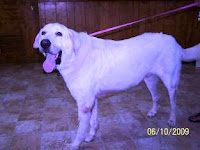 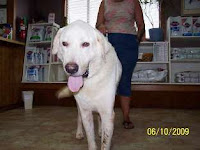 Timber is a young adult, neutered male Anatolian Shepherd Dog. He was picked up as a stray and no one has reclaimed him. Timber is in a shelter and is in need of a foster or adoptive home ASAP.

He is heartworm negative and on preventative, he is fully vaccinated also. Timber is a big boy, weighing 120 lbs. He's a gentle giant though! He's friendly with people, walks nicely on a lead, is a very calm dog and is also good with other dogs.

He has some skin irritation from laying on cement too much so we would really love to find him a home where he could come inside and have a nice doggy bed or blanket to lay on :-)

Timber needs either a foster or adoptive home as soon as possible.

We will help with transport within appx 1,000 miles!

Email me for more information anatolianrescue@yahoo.com 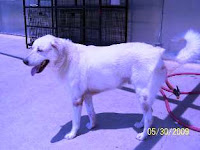 Posted by AnatolianRescueLady at 6:36 AM No comments: 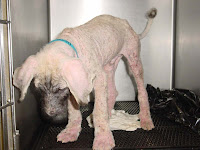 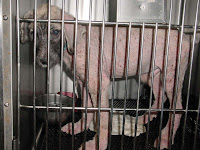 This past April, not quite two months ago, a litter of 5 Anatolian Shepherd pups were turned over to the local Humane Society near Tuskegee Alabama. These pups were given up by their owner because she was "not able to care for them."
THAT was an understatement.
These babies were extremely malnourished, filthy, matted, and full of worms.
One little guy was worse off than the others.
The vet that treated them dubbed him "Demo" because he had demodex mange all over his tiny body.
Demo had to stay behind at the vet clinic when his brothers and sister went to foster care. These "before" pictures show him in his kennel with his skinny little body shaved down because he was so matted and filthy. You ca also see how he was standing rather "flat footed" as a result of being malnourished.
Over the last few weeks, Demo has been treated for mange, his hair started to grow back, he's put on some weight and.......he was adopted by a wonderful family in Louisiana.
This "after" picture was taken soon after he arrived in his new home. He is now known as "Hoss", and is soaking up all the love and attention he can get.
It's hard to tell that this handsome pup almost died from neglect less than two months ago.
Here's wishing Hoss and his new family many years of happiness together.

A very special "thank you" to Dr. Noriko for helping to save Little Hoss and his littermates and to Sue Ellen, their foster mom, for all the TLC she's given them.

"Stay tuned"....... Hoss still has 4 siblings that are looking for loving homes.
Two of them were transported to Ohio last weekend (Leyla & Saffi) and two more are still in Alabama (Sabit and Nuri). 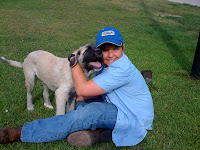 Posted by AnatolianRescueLady at 6:53 AM No comments: 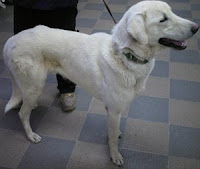 MIDLAND TEXAS: "URGENT" HELP NEEDED ASAP
Dash is a male Akbash in a Midland Texas shelter. They will neuter him , he is young 1-2 years and good with kids. Had an issue with a male dog they put him with ...now he is with a female dog. He was seized from a ranch where there were many animals and he roamed freely.

If you are able to help this boy please contact Janet w/Akbash Rescue:
straughie@comcast.net
Posted by AnatolianRescueLady at 1:05 PM No comments:

"Jade" left Abilene TX early Saturday morning and arrived in her temporary foster home in Kingman, AZ Sunday evening. Jade is laying over in Kingman and will head out to her "forever home" in Redding, CA next weekend.

If you live along that route, keep your eye open for Beth and Juliana's transport request b/c they are recruiting drivers for that trip, scheduled for June 13th & 14th

"Leyla" and "Saffie" also took a trip this weekend. They are 2 pups from a litter of 5 that were surrendered to a Humane Society in Alabama. They were malnourished and neglected when first taken in but they sure do look good now.
A special thanks to Sue Ellen Brown, their foster mom for the past month or more. She took great care of them. Thank you Sue Ellen!

Leyla and Saffie are now in foster care with NASRN in Wooster Ohio and are available for adoption.

Sue Ellen still has 2 male pups that are looking for homes if anyone is interested!
They are near Tuskegee AL.

We want to thank all of the dedicated transport drivers that helped these guys/gals get to their destinations safely. We couldn't do it without your help.

Kudos to our wonderful Transport Coordinators, Juliana Lipe and Beth Goldowitz, we would be lost without you. 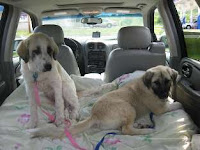 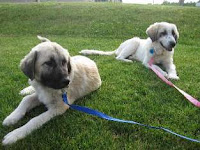 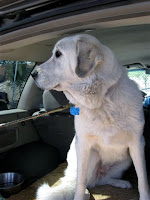 Posted by AnatolianRescueLady at 6:14 AM No comments: 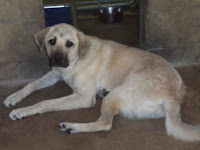 This is an 8 month old female Anatolian puppy that is in urgent need of foster or adoption. She's in a high kill shelter and we do not have any open fosters.
Please e mail me if you might be able to help her.
anatolianrescue@yahoo.com
Posted by AnatolianRescueLady at 11:12 AM No comments:

UPDATE: The young male pup in Spokane, WA has been adopted! Yay! Thank you to everyone that stepped up to help this boy. :-)

Also, the pretty little girl pup in the Cleburne, TX shelter was adopted as well. :-)
The male pup is still there though! If anyone is interested, be sure to let me know.

Summer is the busiest time for rescue. I don't really know why, but we always have a higher in-take during the summer (and holidays) than we do the rest of the year. The bad part is that it's harder for us to find fosters or adoptions during the summer b/c everyone seems to have vacation plans.
A foster home can mean the difference between life and death for a shelter dog.
If you might have room for a dog this summer and would like to consider fostering, please feel free to shoot me an email for more information.


FOSTER OR ADOPTION needed for HANK in AUSTIN TEXAS:
We took Hank and his brothers in last summer when they were just weeks old. Hank's adoptive family has had some hard times recently and can no longer keep him.
So Hank is looking for a foster or adoption ASAP.
He is great with children, good with cats and oter dogs. Hank is housebroken, walks on lead and is a really happy boy. He is turning one year old this month, is neutered, fully vetted and in good health!
We will assist with transport within appx 1,000 miles.

For more info on Hank or fostering/adoption another dog please email me directly
anatolianrescue@yahoo.com

Read More About HANK here! see more pics and theres also a VIDEO of Hank playing with his foster sister!! 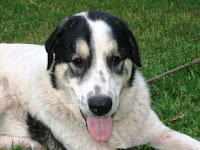 Posted by AnatolianRescueLady at 7:46 AM No comments: