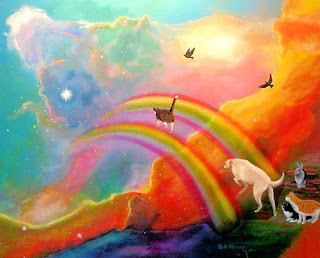 
Posted by AnatolianRescueLady at 6:08 PM No comments:


Back in January of this year, Bear's (formerly known as Bailee) owner left Georgia to pursue a new job and Bear found himself without a home.  Luckily for him, a friend of the owner contacted us, asking for help, and we set about searching for a new home.

Bear didn't have to wait long, though, before he soon found himself on the road heading to his new home in the Toronto Canada area.

It's been about 5 months since Bear has been in his new home and I wanted to share his update with you.  We can never get enough good news and "Happy Tails".  Hope you enjoy the update as much as I did.

Hello Everyone at NASRN and on the Bear Transport Team,

We just finished our Canada Day celebrations, and I know you are all preparing for your 4th of July celebrations, so I thought it an opportune time to send a few photos and let you know that Bear is doing just great!. We couldn’t be happier, and I think he’d say the same.

At his last routine visit to the Vet in late April/early May, everything checked out, and he was pronounced in excellent health. The Vet couldn’t stop smiling as he’s such an engaging character. He weighed in at 110 lbs., a little lighter than when he left GA, but she thought that was just a symptom of his youth, and the amount of exercise he’d been getting, particularly in this very long and cold winter/spring we experienced here. As the weather has warmed up recently he’s been a little less active (but only a little!) and I’d guess he’s easily back to his initial weight (if not higher) now, so don’t worry Jenny! 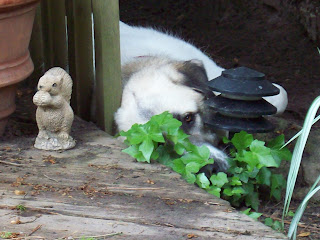 When he first arrived he was quite the digger and chewer (only outside). Of my  15 garden lights he chewed up 14 of them, and there were several large holes along the fence line where he liked to get comfortable. We have since allowed him to make a permanent “den” in a small space between the railing of our deck and the fence. It’s cool, and gives him a good vantage point to observe things, and it seems to have completely satisfied him.  I have to add a bag of fresh dirt periodically as he tends to rearrange it in all directions when he “makes his bed”, but it’s small price to pay. I’ve also replaced all the lights and he hasn’t touched them, nor has he chewed the railings and posts since the early days here. 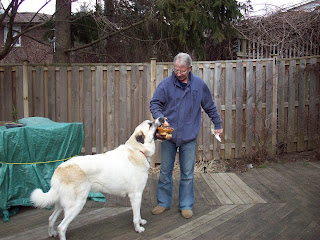 He really does have the most delightful personality, or should I say personalities! With us, our friends and family etc., and with some of his playmates at the dog park, he’s just a big, loveable, goofy, playful guy who we affectionately refer to as “George”. When he’s on duty though, he’s all Anatolian and lives up to his name, Bear. He’s alert to any activity around the house and yard, loudly warns us, and loves to be told “good boy” for doing his job. His Bear side also manifests itself if he’s ever challenged by another dog, especially if it’s not neutered. That is the only thing we have to be watchful for, as he doesn’t hesitate to go from 0 to 100 in a heartbeat (as you clearly advised, Jeff). Other than that, and his penchant for bolting after every squirrel, rabbit, or other critter that catches his eye, even when on leash, he’s just an absolute gem! It’s impossible for us to look at him and it not put a smile on our faces.

I could go on and on about how we feel about him, but suffice to say there isn’t a day that passes without one of us looking at him and then remarking to the other “ I just love this dog”.  So again, thanks to all of you for helping to make this possible for all of us. 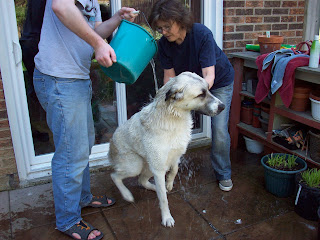 I’ve attached a few photos taken over the last few months; a very recent one in his den, and another peeking out from it; his first bath a few months ago; me in the Spring giving him a giant bone called Goliath; and a couple from a month or so ago with my sister’s Boxer (who knocked Bear into the pool twice!). 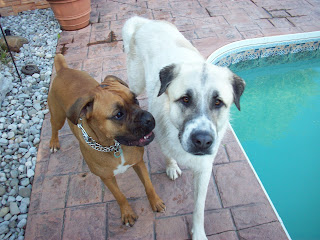 I’ll drop in again at some future date, but till then I hope you all have a wonderful and safe holiday. Happy 4th of July to you all!!!

Posted by AnatolianRescueLady at 2:29 PM No comments: